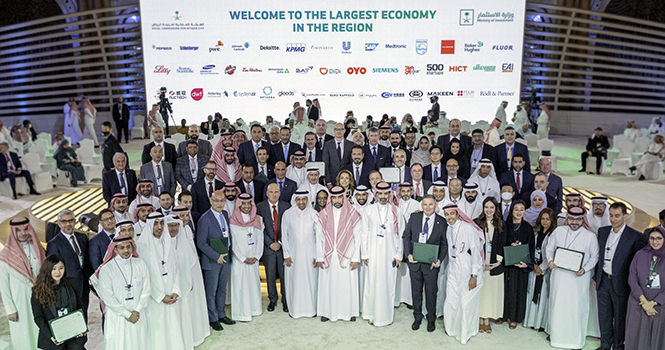 Handing of licenses for regional headquarters to representatives of the MNCs

A total of 44 multinational companies (MNCs) decided to make Riyadh their regional headquarters as announced by the Royal Commission for Riyadh City (RCRC).

The delivery of licenses for regional headquarters to representatives of the MNCs came on the sidelines of a special dialogue session on the second day of the fifth edition of the Future Investment Initiative (FII).

Minister of Investment, Khalid Al-Falih, said that these companies realized the exceptional opportunities that Vision 2030 provides for them, and they will reap its fruits soon.

"Over the past years, we witnessed encouraging reactions from investors that led to an increase in the flow of foreign direct investment (FDI) in the Kingdom's economy,” Al-Falih said.

“We expect a greater presence of investors that would expand the volume of investment in the local market,” he further added.

In February this year, Chief Executives of over 20 international companies signed agreements with the Minister of Investment and the CEO of RCRC to locate their regional headquarters in Riyadh.

As a response to Riyadh's position as the region's largest city economy: 44 multinational companies are slated to open regional headquarters in the capital@FIIKSA @MISA https://t.co/5I7OL9csSX#RHQ #FII #Riyadh pic.twitter.com/r3mD12UAhL