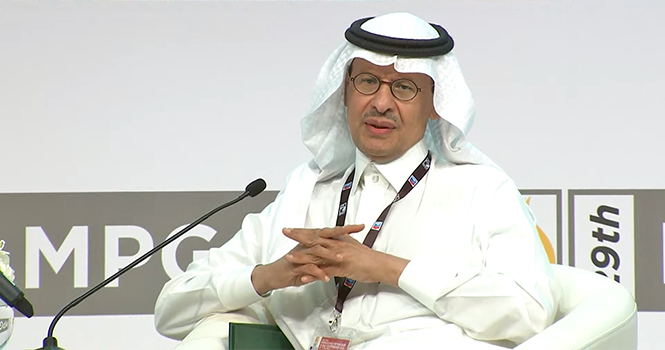 Saudi Arabia's Minister of Energy Prince Abdulaziz bin Salman said that the oil maximum production capacity will be raised by 13.3 million-13.4 million barrels per day (bpd), noting that the amount will be decided in light of the expected agreement on the neutral zone.

The ramp-up will take place by the end of 2026 or in early 2027, Prince Abdulaziz added during a panel session in the Middle East Petroleum & Gas Conference (MPGC) held in Bahrain.

The output will be sustainable, as it could be maintained at that level once it was reached depending on market needs.

The world must resolve the problem of depleting production capacity in the energy sector, Prince Abdulaziz said, adding that the supply chain problems worsened the situation.

Moreover, the shift from electricity generation to gas and renewable energy domestically will provide nearly one million bpd of oil for export, he explained.

Elsewhere, the Saudi minister pointed out that Saudi Aramco is not looking for more investments in upstream business abroad, as the giant oil producer will rather focus on downstream operations, particularly converting oil to chemicals.