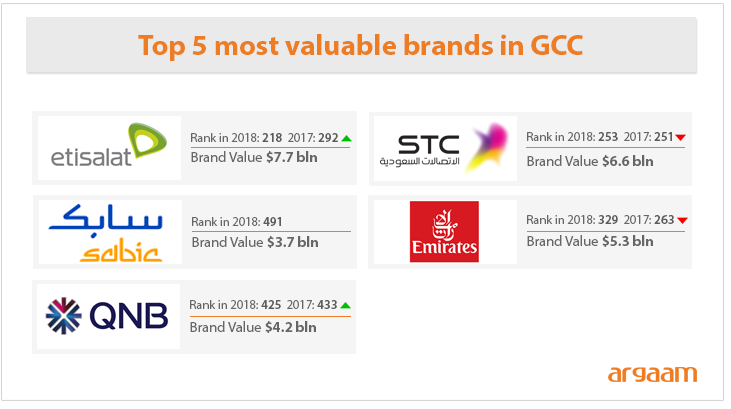 Tadawul-listed telecom giant Saudi Telecom Company (STC) is the most valuable brand in Saudi Arabia, with a brand value of $6.651 billion in 2018, according to Brand Finance’s Global 500 list.

STC was ranked 253 on the global list, down two points from last year. However, the telco’s brand value grew 7 percent over 2017, the report showed.

Saudi Arabia’s biggest petrochemicals producer Saudi Basic Industries Corp. (SABIC) also found a place on the list as a new entry. SABIC was ranked 491, with a brand value of $3.722 billion in 2018.

United Arab Emirates-based Etisalat was the most valuable brand in the Middle East region, with a 40 percent increase in its brand value from last year. Ranked in the global list at 217, Etisalat held a brand vale of $7.7 billion.

“The UAE’s focus on digital innovation has helped support Etisalat brand’s success and paved the way for future growth ahead of Expo 2020,” Andrew Campbell, managing director of Brand Finance Middle East, said in a statement.

Meanwhile, Amazon.com came in as the world’s most valuable brand as its brand value rose 42 percent year-on-year (YoY) to $150.8 billion. Apple ($146.3 billion) and Google ($120.9 billion) took the next two spots, respectively.

For the first time since the inception of the Brand Finance Global 500 study, technology brands claimed all top five places in the league table, the report showed.

“Change at the top is reflective of a wider global trend as the technology sector accounts for more than twice as much brand value as telecoms,” the report said.