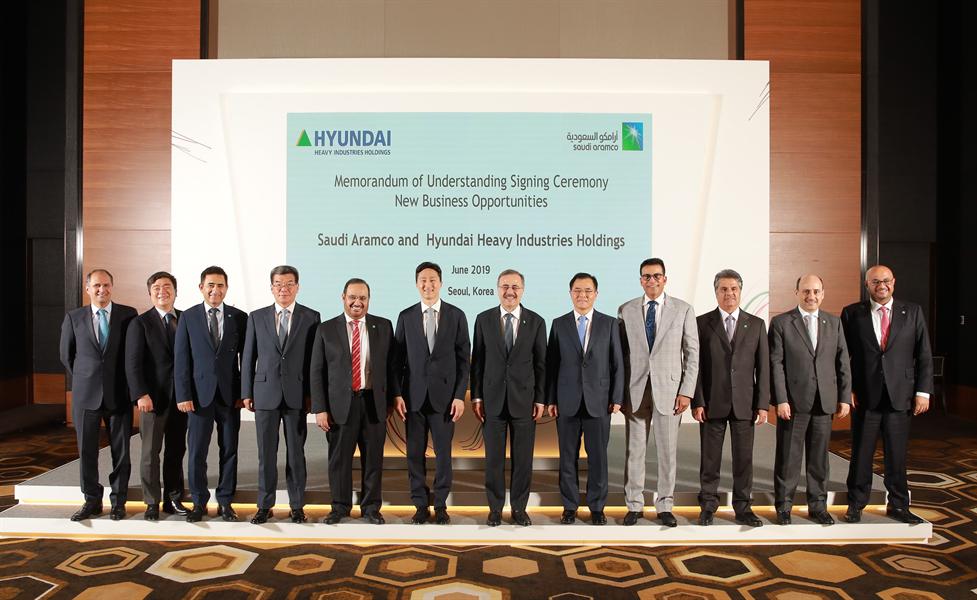 The deals aim to expand international operations and support the region’s energy security with the expansion of Arabian crude oil supply to Asian markets, Aramco said in a statement on Wednesday.

The state-owned oil giant said the deals are worth “billions,” without specifying the value. Argaam has reached out to the company for clarification of the full amount.

“Today’s agreements mark a new era of cooperation with our Korean partners who will play an increasingly important role in our strategy to capitalize on new initiatives that include long-term energy supply, maritime and infrastructure development, and research and development in the automotive, crude to chemicals, and non-metallic sectors,” said Amin Nasser , Saudi Aramco President and CEO.

1) Saudi Aramco, HHI, and The Saudi Arabian Industrial Investments Company (Dussur) inked a deal to establish a joint venture (JV) for an engine manufacturing and aftersales facility in Saudi Arabia. Under the partnership, Saudi Aramco will own 55 percent of the JV, while HHI and Dussur will own 30 percent and 15 percent respectively.

2) Saudi Aramco and HHI also have agreed on Memorandum of Understanding that extends the existing collaboration to develop ship-building, engine manufacturing, refining, and petrochemicals.

3) Saudi Aramco and HHI have also agreed to increase the latter’s equity share in the International Maritime Industries (IMI) from 10 percent to 20 percent.

4) An MoU between HHI, Bahri, and IMI (JV between Saudi Aramco, HHI, Lamprell, Bahri), covering ship-building, and transportation as potential areas of cooperation.

5) HHI and IMI signed an MoU to explore business opportunities in the shipbuilding business.

6) Saudi Aramco and Hyundai Oilbank have signed a crude oil sales agreement between the former to supply Arabian crude oil to the latter.

8) Saudi Aramco and Hyundai Motor Company signed an MoU that will create a strategic collaboration to accelerate the expansion of the hydrogen ecosystem in the Saudi Arabian and South Korean markets, and to explore the use of advanced non-metallic materials in various fields including the automotive industry.

9) Saudi Aramco and Korea National Oil Corporation signed an MoU that will allow the oil giant to explore the potential of crude oil storage in South Korea to complement its marketing and supply activities.

10) An MoU with Hyosung Group to build a carbon fiber manufacturing facility in Saudi Arabia. This MoU will also provide a collaboration platform for the two companies on research and development, and deployment of carbon fiber technology.

11) An MoU between Saudi Aramco and GS Holdings is aimed at identifying specific investment opportunities in the Kingdom of Saudi Arabia.

12) Saudi Aramco and Daelim Industrial are collaborating on petrochemical projects and signed a new MoU to foster collaboration on value-added chemical products in the Kingdom.