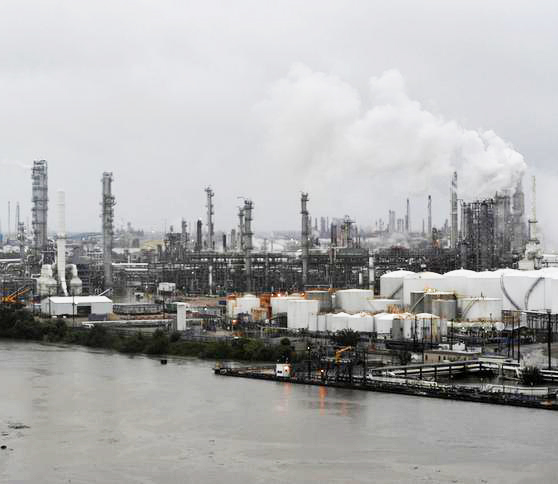 Flooding from Tropical Storm Harvey has shut down nearly 3.6 million barrels per day (mbd) of refining capacity in the US states of Texas and Louisiana, accounting for nearly 20 percent of the country’s total, Reuters reported Tuesday citing company reports and its own estimates.

“The benchmark NYMEX RBOB gasoline contract has spiked and the front three months of the forward curve are in backwardation, reflecting shortage of supply in the market,” said Vandana Hari, energy analyst and founder of Vanda Insights.

“We see the RBOB/WTI October futures crack, which had vaulted over $22/barrel in the Asian morning Wednesday, continuing to remain strong until a substantial part of the refining capacity is back in operation, or the summer driving season for the fuel drops off, whichever happens earlier,” she told Argaam.

The US Gulf Coast houses nearly half of domestic refining capacity, with about 5.6 mbd of capacity in Texas and 3.3 mbd in Louisiana.

Several major refineries have partially or completely halted production in the wake of the storm, including the Saudi Aramco-owned Motiva refinery in Port Arthur, Texas.

The Motiva Refinery, which is the nation’s largest, said on Tuesday that it has cut its production rate to 40 percent capacity. Motive has a production capacity of 603,000 barrels per day, which means that about 350,000 bpd have been taken offline.

Other large refineries that have been shut down include Royal Dutch Shell’s Deer Park refinery in Houston with a 340,000 bpd oil capacity, and Exxon Mobil’s plant in Baytown, Texas, with a capacity of over 560,000 bpd, CNBC reported.

Brazil-headquartered Petrobras also said earlier this week that it would close down its Pasadena, Texas refinery with a 110,000 bpd capacity.

Tropical storm Harvey – which first hit the state of Texas on Friday as a hurricane – has begun to move into southwest Louisiana, according to news reports. At least 30 people are said to have died as a result of the storm, with hundreds of thousands under evacuation orders.

Further heavy rains are expected on the Gulf Coast until the end of the week, making it difficult for refineries to resume operations.

“The lack of demand from refineries is likely to drive up US crude oil stocks. The only thing that would slow this process would be a significant fall in crude oil imports, which are also likely to be hampered due to the closure of waterways and loading terminals,” Germany’s Commerzbank said in a note.

“Brent remains relatively immune to the downward pressure on WTI from the US refining capacity closure. Sentiment in this market has diverged from WTI since early August,” Hari said.

Meanwhile, the overall impact of the storm and related shutdowns is “relatively neutral” as far as OPEC’s efforts to balance the market are concerned, she added. The cartel has pledged with a group of non-member nations to cut oil production by a combined 1.8 mbd until March 2018.

“US tight oil production is likely to show a dip for August and perhaps in the early part of September on account of the closure of several wells in Eagle Ford, but it does not move the needle on the longer-term rebalancing of the market, which has become a rather slow and drawn-out process,” Hari said.