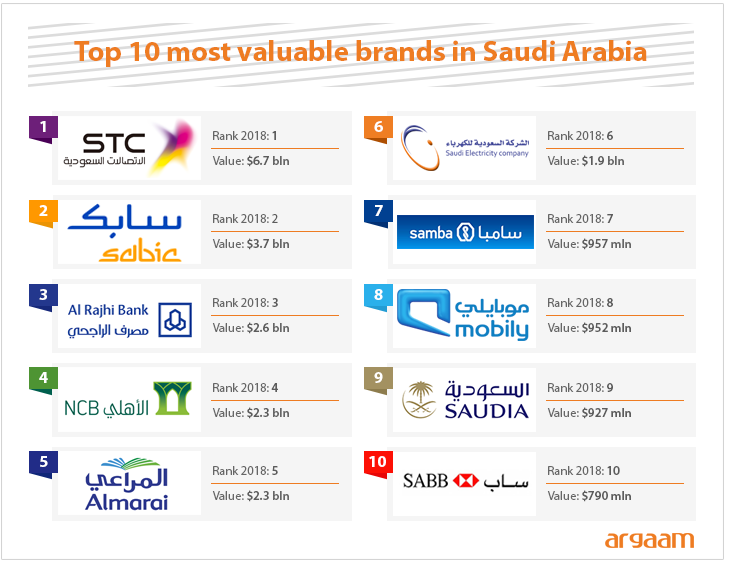 Saudi Arabia’s biggest telecom operator Saudi Telecom Co. (STC) emerged as the most valuable brand in the Kingdom, with a value of $6.7 billion, the inaugural list of top 25 Saudi brands by consultancy Brand Finance showed.

“STC is firmly focused on introducing and investing in the latest digital technologies such as cybersecurity, cloud computing, Internet of Things, data analytics and digital identity; positioning itself as regional leader in the technologies of the new economy,” the UK-based consultancy said.

In the Middle East Top 50 survey, however, STC slipped to the second position as UAE’s telco Etisalat bagged the top spot with a 40 percent increase to its brand value at $7.7 billion, according to a separate list by Brand Finance.

Saudi petrochemicals giant, SABIC, was the fastest growing brand in Saudi Arabia with a whopping 78 percent brand value growth since 2017, the report showed.

SABIC’s sharp rise to a brand value of $3.7 billion in 2018 was driven by the company’s efforts to capitalize on the US shale boom by growing its business in America, Brand Finance said.

Banks dominated the Saudi rankings with 11 of the top 25 spots occupied by lenders, led by Al Rajhi Bank with a value of $2.6 billion.

“The dominant position of the banking sector can be attributed to consistent efforts by Saudi banks to manage operating costs effectively alongside a committed drive towards investing in digital strategies,” the report said.

Of all 25 Saudi Arabian brands, Saudi Electricity Co. (SEC) held the highest Brand Strength Index (BSI) score of 82.4 out of 100, the consultancy said.

The utility brand recently introduced electronic bills instead of paper-based bills for all of its customers. Multiple efforts have also been made towards community awareness as the brand rolled out a successful campaign on electrical safety, it added.

Meanwhile, in the overall Middle East region UAE’s Emirates airline emerged as the strongest brand, although the carrier’s brand value fell 12 percent over last year to $5.3 billion in 2018.