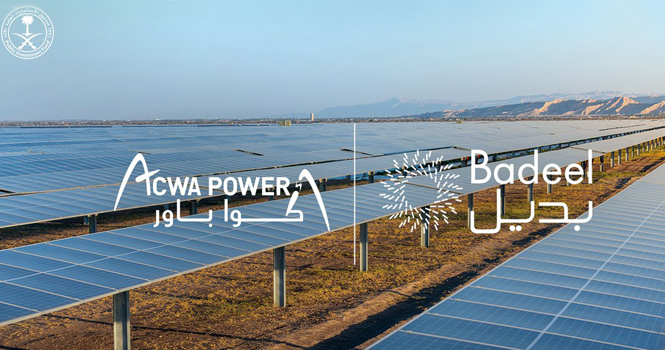 Logo of Badeel and ACWA Power

The project will be jointly owned by Badeel and ACWA Power. Each company will hold a 50% stake through the establishment of Shuaibah Two Electrical Energy Co., a joint venture dedicated to the development of the project.

Badeel and ACWA Power will build, own, and operate Al Shuaibah 2 facility and the electricity produced will be sold to SPPC. When complete, it will power 350,000 homes.

Yazeed Al-Humied, Deputy Governor and Head of MENA Investments at PIF, said,” This marks a key achievement toward PIF’s commitment to develop 70% of Saudi Arabia’s renewable energy by 2030."

"Utilities and Renewables is one of PIF’s priority sectors as part of its domestic strategy, which focuses on unlocking the capabilities of promising sectors to enhance Saudi Arabia’s efforts in diversifying revenue sources,” Al-Humied noted.

In a statement to Tadawul, the company said this PV solar plant, located in Makkah, is the largest in the MENA region, with a production capacity of 2,060 MW.

PIF will be a partner in this project, with a 50% stake in Shuaibah Two Electrical Energy Co.

The contract is effective 35 years, the company said, adding that the plant will be developed, built, financed, owned and operated, with a capacity of 2,060 MW.

The relevant financial impact is expected to materialize after the commercial operation date in Q4 2025.