Saudi Arabia jumped 13 positions, the highest leap among the 63 participating countries, in the IMD World Competitiveness Yearbook 2019 issued on Tuesday by the IMD International Institute for Management Development (IMD), in Lausanne, Switzerland.

Saudi Arabia is now ranked 26th, making it the 7th most competitive country among its G-20 peers, ahead of advanced economies such as Republic of Korea, Japan, France, Indonesia, India, Russia, Mexico, Turkey, Republic of South Africa, Brazil and Argentina.

A huge achievement for a country that joined the ranking only in 2017, the Center for International Communication (CIC) said in a statement.

Dr. Majid bin Abdullah Al Qassabi, Minister of Commerce and Investment and Chairman of the National Competitiveness Centre (Tayseer), pointed out that the exceptional performance of the Kingdom is the result of an ambitious cross-sectoral and collaborative work, involving more than 40 government agencies, all aligned with the aspirations of Vision 2030 to improve the competitiveness of the Saudi economy.

Al Qassabi added that the National Competitiveness Centre, established by Cabinet decision earlier this year, plays a critical role in raising the competitiveness of Saudi Arabia, and making it a favorable destination for domestic and foreign investors.

The Centre works very closely with the private sector to alleviate regulatory and procedural burdens and unleash their potential to realize the aspirations of Vision 2030. 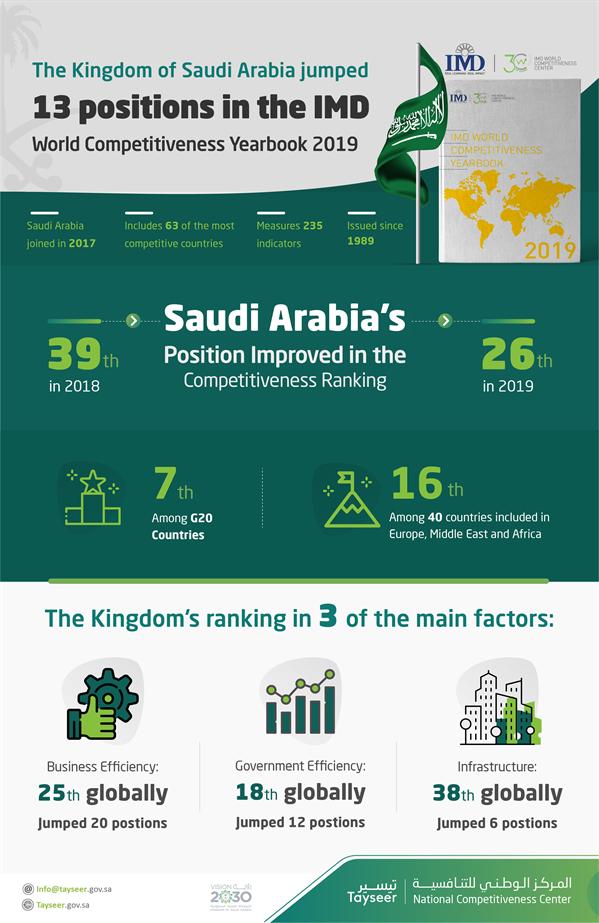