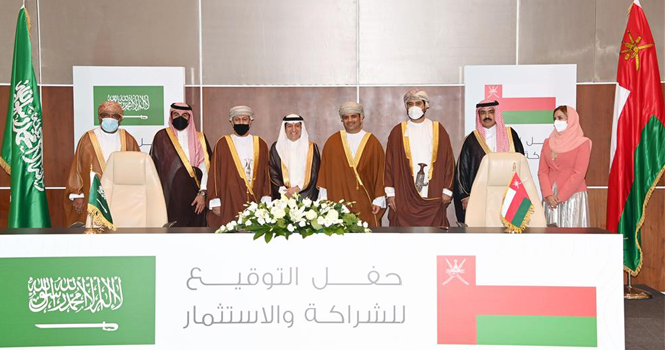 These MoUs were signed on the sidelines of the visit of Saudi Crown Prince Mohammed bin Salman to the Sultanate of Oman, SPA reported.

The memorandums aim to strengthen mutual investments and joint cooperation in certain projects under promising economic sectors in both countries. They also underline the areas of common interest, such as energy, renewable energy, health care, pharmaceutical industries, real estate development, tourism, as well as petrochemicals. It also includes manufacturing industries, food and agriculture industries, transportation and logistics, information technology and financial technology, in addition to a number of qualitative investments in the Duqm region.

Saudi Minister of Investment, Khalid Al-Falih, said: "The Kingdom of Saudi Arabia and the Sultanate of Oman are full of promising investment opportunities that provide a fertile ground for establishing various investment partnerships between the Saudi and Omani business sectors."

These MoUs will enhance investments in a number of fields, which will be reflected in the development of services and the achievement of the aspirations of Saudi Vision 2030 and Oman's Vision 2040, Al-Falih added.

The MoUs were driven by the joint work of the two sides, represented by the Saudi Ministry of Investment, Oman's Ministry of Commerce, Industry and Investment Promotion, and OIA.

Omani group OQ signed three MoUs with Saudi players. One of these MoUs was inked in petrochemicals, renewable energy and green hydrogen sectors with Saudi-based ACWA Power and Abder Products Co. The second is related to oil storage with Aramco Trading, while the last one was closed with Saudi Basic Industries Corp. (SABIC) for the development of Duqm petrochemicals complex project.