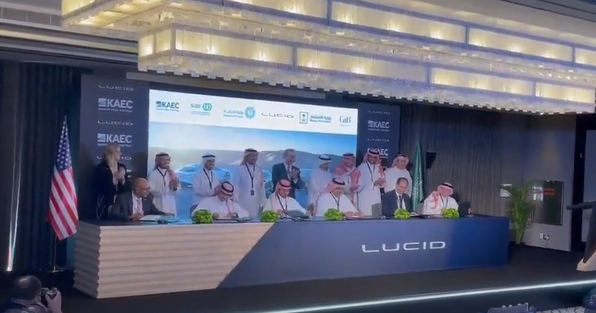 An official signing ceremony was held today for the agreements concluded in February 2022 with the Ministry of Investment, the Saudi Industrial Development Fund (SIDF), Emaar The Economic City (Emaar EC) and Gulf International Bank (GIB), for the construction of AMP-2, a world-class Lucid production factory in Saudi Arabia with a capacity of 155,000 electric vehicles.

The agreements celebrated today are estimated to provide financing and incentives to Lucid up to $3.4 billion in aggregate over the next 15 years to build and operate a manufacturing facility in Saudi Arabia.

In February, Emaar The Economic City (Emaar EC) inked a development and lease agreement with Lucid LLC at a total value of SAR 113.5 million, according to data available with Argaam.

Under the 25-year contract, Lucid will lease an industrial land plot in KAEC's Industrial Valley to build and operate an auto manufacturing and assembly facility with all ancillary services.

At AMP-2, Lucid plans to establish operations initially for re-assembly of Lucid Air vehicle "kits" that are pre-manufactured at the company's U.S. AMP-1 facility in Casa Grande, Arizona, and, over time, for production of complete vehicles.

Lucid Motors expects the facility to reach a maximum production capacity of 150,000 vehicles annually. The factory is scheduled to kick off operations in H1 2022.

Vehicles will be initially slated for the Saudi Arabian market, but Lucid plans to export finished vehicles to other global markets. In addition, Middle East regional deliveries of the Lucid Air are expected to begin later this year, supported from the Casa Grande factory.

Last April, the Saudi government signed an agreement with Lucid for the purchase of at least 50,000 EVs and up to 100,000 EVs over a 10-year period, in an effort to diversify the Kingdom's fleet to be more environmentally friendly.